A blog about life on the road, and the beauty of seeing the world….

Having spent 5 fantastic days in San Francisco, we made our way down to Los Angeles.

There are two main routes to get to the city of angels. If time is short, the traditional inland highways will take approximately 6 hours (assuming you  are a superhuman who won’t stop anywhere along the road). The second route, the famous Highway 1, will probably add a few more hours to the journey, in exchange for a mind blowing stretch of coast along the Pacific Ocean passing thorough some of the most suggestive locations in California. Regardless of which direction you are travelling, I cannot recommend enough that you take the second, and longer, route. 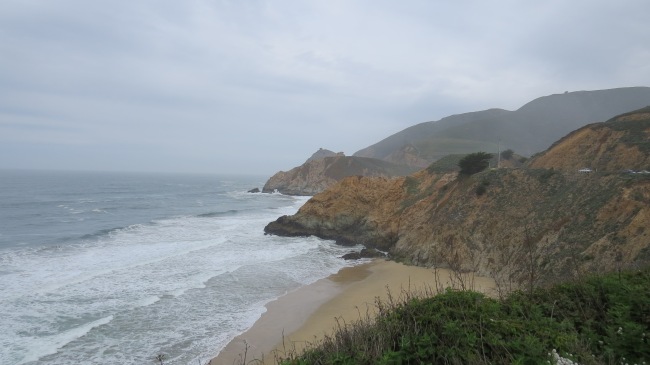 When planning your journey along Highway 1, do take into account at least one and half days, if not two, to truly enjoy this fantastic drive and the sights along the way. Highway 1 can be quite dangerous, especially around Big Sur, with very long and wild stretches, encountering very little human presence, with no lights or side barriers, so I suggest you plan a night stop over. Also, in the hours of darkness you will miss out on the amazing views of the Ocean for which you took this route in the first place. We were really ambitious and tried to continue driving after the sun came down, but quickly changed our mind and opted for an unimpressive motel in San Simeon.  Besides, who wants to be stuck at night in the middle of nowhere in the US ? (we all know that’s when shit goes down)

Our first stop along the way was Monterey. I had heard a lot about the local Marine conservation Centre and the delicious seafood restaurant (i am hoping in no way, shape, or form connected to each other). The Monterey Bay Aquarium is one of the biggest in the USA and it is located right on top of the Ocean, just a stone throw away from the deep sea and the famous Monterey underwater Canyon. besides the usual suspects you will find in an aquarium, I was incredibly impressed with their Jellyfish atrium. Ok, you might think jelly fish are not the most exciting inhabitants of the sea, but their display was simply magical, almost like a work of art. 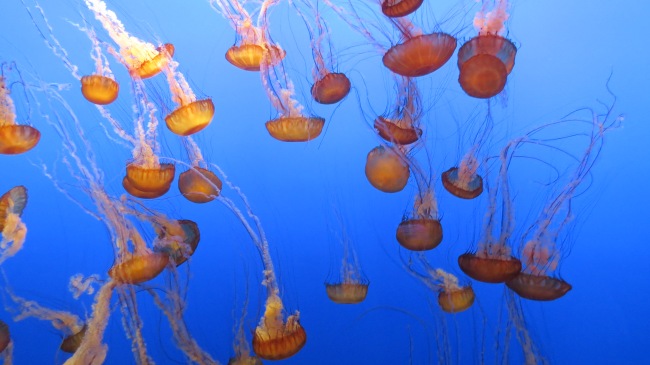 In its Outer Bay wing, dedicated to the deep sea life of Monterey bay, the Aquarium has an enormous 1,200,00 gallon tank, hosting a wonderful variety of sharks, sun fish (which btw looks absolutely ridiculous, will post a photo cause it is just too cool to be missed) and other local marine biodiversity. The tank has one of the world’s largest single pane windows, so big and beautifully crafted that you almost need to touch it to really believe there is something separating you to this amazing creatures.

Having gorged on absolutely mouth watering lobster and crab, we went on to visit Carmel (or Carmel-by-the-sea). Monterey and Carmel are linked by a scenic route called the 17 mile drive. The road passes through private residences ad gold courses, so there is a small toll to pay to drive it, but you are rewarded by great views and also the chance to stop over by the beach. If you are intrigued, it won’t be hard to find,  but make sure you keep the speed limit of 25 miles/h. You will want to go slow to make sure you catch the view 🙂

A small and very rich town of Spanish origin, Carmel is famous mainly for three things, 1) Its natural beauty 2) iIs traditional Spanish “Mission”, 3) A posh hotel recently renovated by none other than Clint Eastwood. Since we had neither the money nor the time to sleep at Clint’s hotel, we simply enjoyed the free landscape and paid a few dollars to visit the Mission.

The mission was established in 1770 and initially located in Monterey, but was later moved to Carmel by Father Junipero Serra, who is still buried under the altar. Built in classic Spanish style, the church hosted the first Library in California. Its gardens, where many of the indians who were taken in and baptised by the Mission are now buried, is adorned with statues and beautiful flower, making this place a worthy stop on our trip.

The following 140 km, connecting Carmel to San luis Obispo, are known worldwide as the Big Sur (meaning the Big South). This very isolated stretch of coast, virtually undisturbed by human presence if not for a few scattered motels and camping sites here and there, will leave you speechless. 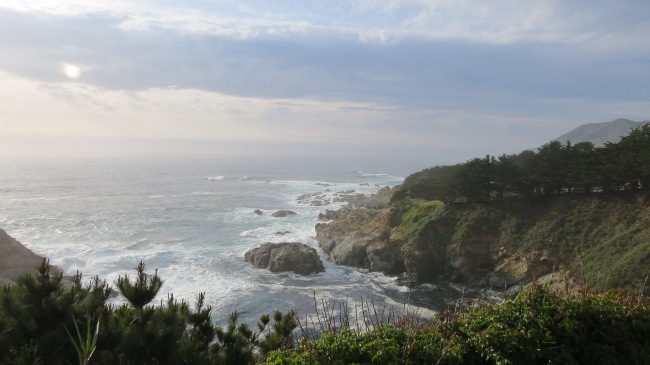 A normally short drive took us over three hours, as every new scenery of shade of orange, blue and pink in the sky, demanded a stop at one of the widely available vista points. The cliffs sinking down in the ocean make you feel so small, but it is a great feeling. As we drove, almost reaching our destination, the sun did us the favour to set, creating one of the most beautiful evening skies i have ever seen.

Darkness forced us to stop for the night, but our final destination was now just a few miles away. These were spent cruising by Cachuma lake and stopping over in Santa Barbara, with a final stop in the scenic village of Ojai. Santa Barbara and Ojai are both worth stopping by, if not for the feeling to be in a world where time doesn’t pass and everyone is always tanned, happy and chilled out (no wonder, with vast and easily available amounts of medical marujana).

The beautiful thing about this road trip was that for most of it, there was nothing else to do but enjoy and take in the view. And to be completely honest, i struggle to think of something that could make this better.

Things were about to get veryyy different in LA. But different isn’t always bad, right?

Welcome to My Carry-on Life

Hey, My name is Nicoletta! I write about travel (and sometimes about food) and I try to keep it genuine and informative. My goal is to share travel tips, must-see places (and disasters too!) so that you can make the most out of your next adventure.

Get in touch at nicoletta.pavese@hotmail.it